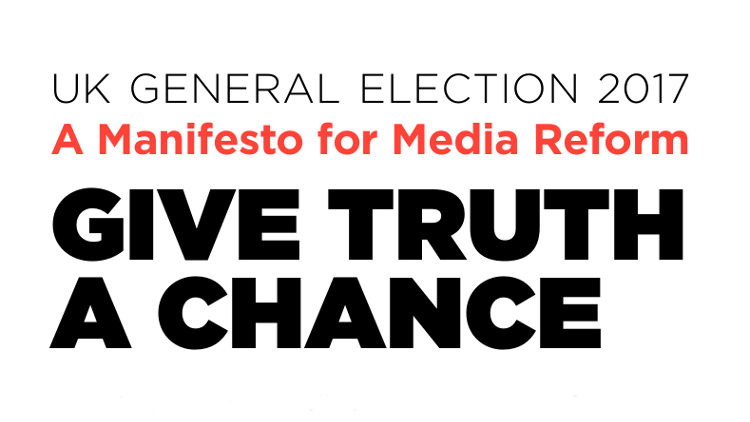 The crisis in the media must be resolved by putting checks on the big corporations that dominate the market, according to an election manifesto published by a media campaign group today.

There should be limits on how much the companies can own, and if they exceed them – as Rupert Murdoch’s corporations do, they must be required to stick to certain standards in the public interest.

This is the main call of the Campaign for Press and Broadcasting Freedom, a campaign group of media workers and supporters launched by the media unions in 1980.

In its manifesto, entitled “Give Truth a Chance”, the CPBF says that the “fake news” that is the cause of public alarm doesn’t just come from fringe websites in the USA but from commercial media here as well. “The public deserve better”, it says, and calls for

It says the arrangements for press self-regulation put forward by the Leveson Inquiry should be adhered to, with

The government should also instigate the second stage of the Leveson Inquiry into the axis of corruption between the Murdoch press, successive governments and the police.

There should be checks on the giant internet corporations like Google and Facebook, to make them take responsibility for the material on their sites and remove what is unlawful. They should also be required to pay a levy on their enormous profits – which they generate by republishing material generated by others – to help fund new independent local media.

The CPBF manifesto Give Truth a Chance (.pdf) is attached, and is online at https://www.cpbf.org.uk/media-manifesto/