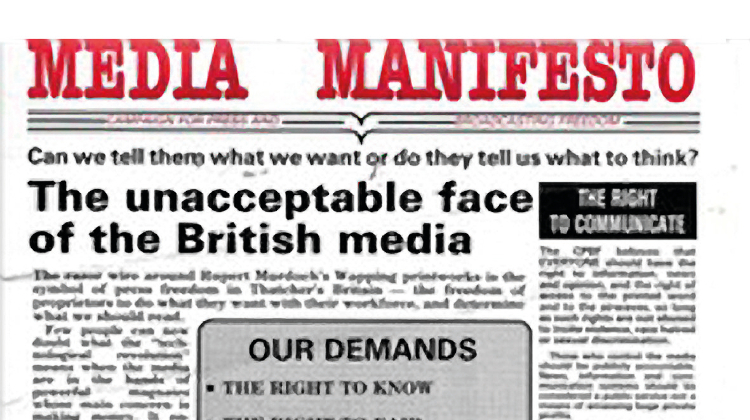 Insufficient income and resources meant that, towards the end of its 40-year existence, the CPBF could not maintain this level of commitment. The Free Press editor and the national organiser gave their services free over several years to save money. Even with the recent engagement of a part-time national organiser, none of the fund-raising initiatives has raised sufficient resources to finance our work.

The CPBF was formed in 1979 at the beginning of the Tory Government’s war on trade unionists and trade union rights, following more than a decade of print and media unions challenging regularly the more extreme material carried by newspapers. Trade union membership was at its height (13.2 million in 1979), and public service workers were mobilising against low pay, a period dubbed the “Winter of Discontent” by newspapers keen to attack any action by trade unions.

The Tories were elected on an anti-union ticket ready with a strategy to restrain trade unions and undermine their ability to organise and represent workers effectively. A constant stream of media propaganda accom­panied policies and laws attacking unions in sectors one after another.

Production of Media Manifestos since 1986 has enabled us to reach towards political parties to raise awareness and seek to influence policy but, without the regular pressure on the employers and support of trade unions in the media industries and more widely, the nature of our method of work has necessarily had to change. Campaigning from without instead of within the media industry has diluted the ability to apply direct pressure on the employers, and indirectly on politicians.

When the CPBF was first formed we were the only media reform organisation. Now there are scores of groups large and small mobilising on every aspect of press content, ownership and freedom – print and online. The National Council and the Annual General Meeting were clear in their support for these current media campaigns. We believe that the issues spelt out in 1979 are more important now than they were even then and hope that the efforts of the Media Reform Coalition and the initiative of CPBF members to create a Better Media movement will be successful. CPBF members and supporters in Yorkshire, the North West and the North-East are also determined to maintain their activities.

The CPBF may be laid to rest at the end of this year, but the aims and spirit will be carried on and into the other flourishing media campaigning groups.