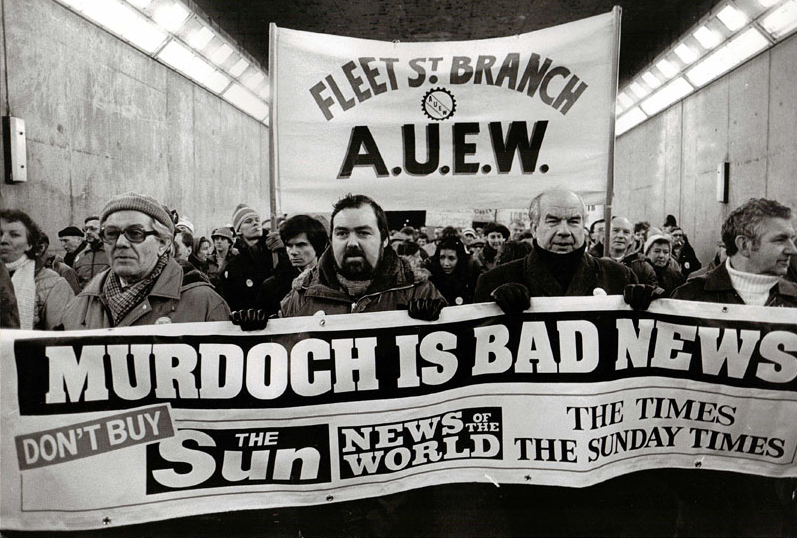 In January 1986, a momentous year-long industrial dispute began when Rupert Murdoch, owner of four of Britain’s leading newspapers The Sun, News of the World, The Times and The Sunday Times, moved production from Fleet Street to a secretly equipped and heavily guarded plant at Wapping, in east London. At the same time a new plant was secretly developed at Kinning Park, in Glasgow, where theNews of the World was printed for the first time on 25th January. On the same day The Sunday Times was printed at Wapping, followed by The Times and The Suno n the following day.

In a bid to save thousands of jobs and to protect the basic rights of workers to organize in defence of their conditions, all of the print unions at Murdoch’s papers went on strike.

Today, Rupert Murdoch’s newspapers have plumbed new depths in debasing the British media. Revelations of industrial-scale phone hacking at the News of the World and corruption of the police and national politics have exposed the malign influence and power of a global media empire.

The decades-long accumulation of power came dramatically to a head with the year-long dispute. It was when negotiations broke down that the strike began, and production of the papers was shifted overnight to new, non-union printworks at Kinning Park and Wapping with the sacking of 5,500 employees.

Murdoch’s vast resources, coupled with Conservative anti-union legislation had enabled the company to equip and staff the two plants in secret, with strike-breaking labour recruited by the electricians’ union in an act of treachery unparalleled in labour movement history.  One honorable exception was an AUEW member  who resigned after less forty-eight hours at Kinning Park.  As a maintenance engineer it became clear to him that he was being asked to work as a printer and that was against his trade union principles.  The presence of razor wire and security cameras at the plant, as well as the prospect of being bussed through picket lines was also disturbing.  After resigning the member informed his District Secretary what was going on.

That the dispute was about union refusal to engage with new technology was a myth that is still widely held today.  Rather it was about the abuse of corporate power through media monopoly and a massive exercise in union de-recognition that quickly spread throughout the printing industry and beyond.

The High Court in London ordered the sequestration of SOGAT funds when distribution workers in London refused to handle Murdoch’s papers. Scottish courts banned SOGAT from threatening the distribution of News International titles north of the border.

More than 1,400 strikers and supporters were arrested, six were jailed and hundreds injured during demonstrations and picketing. Complaints of police brutality and unwarranted arrests led to an inquiry that described police actions as violent and undisciplined.

‘It’s the first night of the dispute at Kinning Park, and the TNT lorries roar down the street and enter the plant. After an hour they appear to jeers from the picket line, a union official shouts ‘where are they are going?’ Then l’m in a car following the lorries.  Will it be to a large distribution warehouse somewhere in the city? No, we find ourselves sitting on a runway in Glasgow Airport watching the bundles of papers being loaded on to a plane bound for London. A strong presence at the picket line lasted for weeks during some of the coldest winter nights.’

To mark the 30th anniversary of the dispute Unite is hosting an exhibition featuring graphic accounts and dramatic images of events throughout the year-long dispute. The exhibition will be held at Unite, John Smith House, 145-165 West Regent Street Glasgow, G2 4RZ,  from 3rd to 28th October. The exhibition is open  Monday to Friday, 10am until 4pm, group visits are welcome, other times by arrangement. Contact Unite 0141 404 5424 or Alan Richardson on 07964 883129.