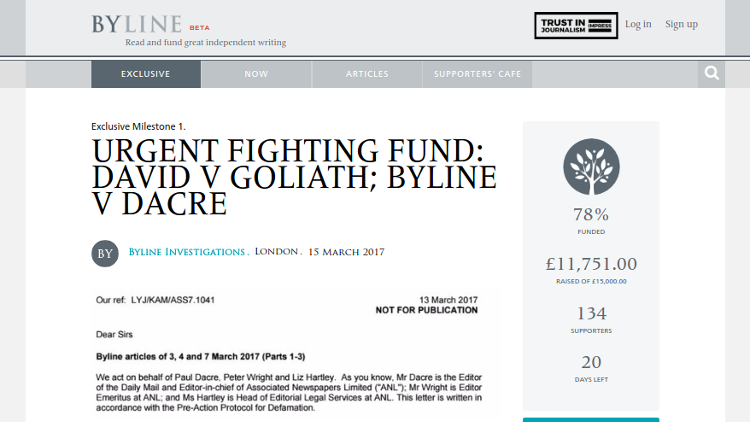 A series of crowd-funded investigative reports into the use of private investigators by Associated Newspapers, publishers of the Daily Mail, has provoked a threat of a libel action from editor Paul Dacre.

The revelations were published on the Byline website following thorough research into original documentation. The reports allege that Associated Newspapers kept quiet in its evidence to the Leveson Inquiry about “substantial sums of money paid to a private detective”, even after a police probe into the detective’s activities had begun.

In 2005, the investigator pleaded guilty to breaching data protection legislation and received a conditional discharge.

Byline reported that although the Mail did submit spreadsheets containing the information to the Inquiry, the documents were not publicly disclosed until formally requested.

Three Byline journalists, including NUJ members, were named in the pre-action correspondence from lawyers representing editor-in-chief of Associated Newspapers Paul Dacre, ANL editor emeritus Peter Wright and Liz Hartley, the firm’s head of editorial legal services. They claim that three Byline reports “contain a number of allegations that are defamatory and untrue”.

In a statement published on its website, Byline says: “They have not said what it is they say is false and we have responded to their lawyers’ letter urging them to do so as a matter of urgency, so we can take appropriate corrective action if required.”

Byline is registered with press regulator Impress, itself a frequent target of hostile coverage by the Daily Mail.

Daily Mail editor Paul Dacre is known for trying to avoid door-stepping by other journalists.

The apparently aggressive and high-handed reaction from such senior ANL figures is regarded by some journalists as indicating that Byline’s temerity has hit a sensitive nerve.

The move also sparked speculation about whether those with links to one of the world’s most-visited websites might try to bully a tiddler start-up out of business.

The irony is compounded as Paul Dacre is on record for condemning UK libel laws as “draconian” and warning of their “power to suppress”.

Byline have opened a fund to help fight the threatened action. Details of the exchange of correspondence have been published online at https://www.byline.com/project/67