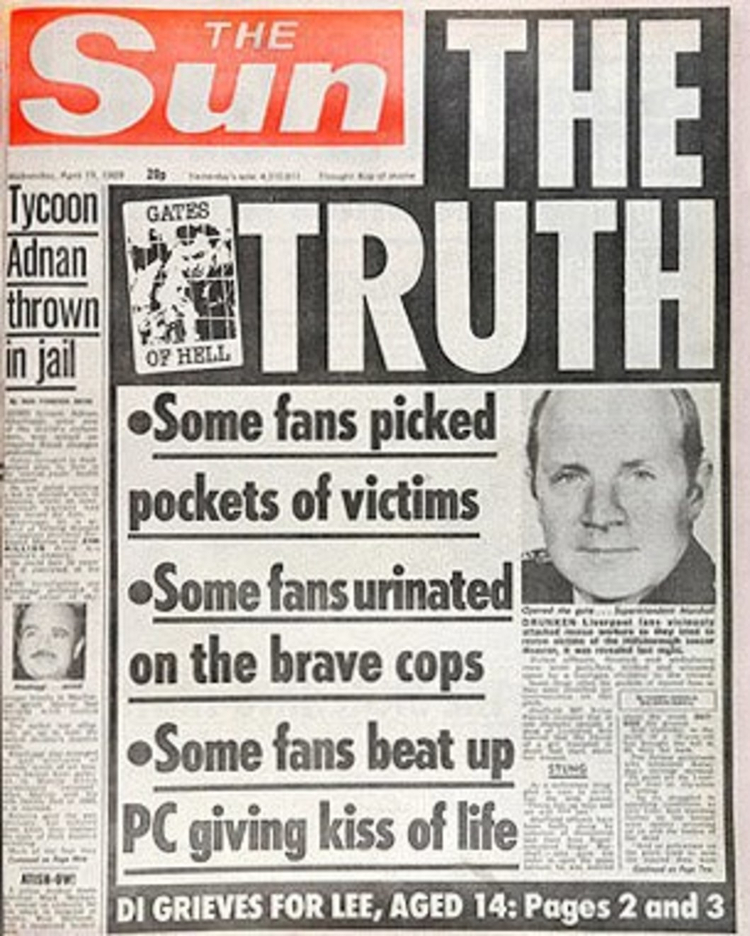 Infamous The Truth front page of The Sun published when now suspended Kelvin MacKenzie was still editor of the paper. Fair use.

Kelvin MacKenzie has been suspended from The Sun on the eve of the anniversary of 96 deaths at Hillsborough, making CPBF’s Granville Williams’ “Truth lies and a 28-year search for justice” for the latest edition of ColdType more pertinent than ever.

Before we share Granville’s article (below), here is a snippet of the article that led to Kelvin MacKenzie’s suspension:

Kelvin MacKenzie in today's Sun. Yet another reminder of why his apologies to the people of Liverpool mean nothing pic.twitter.com/BCaohohAhl

And here are some tweets of the breaking news of Kelvin MacKenzie had been suspended:

BREAKING: Kelvin MacKenzie suspended from The S*n after expressing "unfunny" views about people of Liverpool https://t.co/ImdU0O3DQA

Kelvin MacKenzie suspended from The Sun after ‘unfunny’ and 'wrong' column https://t.co/I52BDoM79V

And finally, a few examples of the many widely shared comments on the matter, many of which point out that perhaps The Sun’s editors and proprietors ought to shame some of the blame for all this too.

Kelvin Mackenzie writes a nasty, stupid slur about Liverpool again – the day before the anniversary of 96 deaths at Hillsborough. Words fail

Kelvin MacKenzie suspended. But his column would've gone through *several* checks before print. So *several* ppl thought it was fine 😕🤔

Kelvin Mackenzie has been suspended by the Sun. He is just a columnist nowadays. @tonygallagher is the Editor, so should take the heat too.

Remember two things about Kelvin MacKenzie.
1) Murdoch has only suspended NOT sacked him
2) The Sun CLEARED & APPROVED MacKenzie's column

After all the recent sexual harassment and racism scandals at Fox News, Kelvin MacKenzie’s suspension is surely yet another example of why we must #StopMurdoch and do all we can to stop the Fox-Sky merger that will give the Murdoch family 100% ownership of Sky and ever-more control over our political and culture discourse.

And now for Granville’s piece as orignially published in ColdType:

There’s nothing new about ‘fake news,’ writes Granville Williams, who recalls the infamous lies that led to a long-lasting boycott of Britain’s biggest-selling paper (then edited by Kelvin MacKenzie)

Twenty-eight years after the Hillsborough football disaster at the English FA Cup semi final match between Liverpool and Nottingham Forest at Sheffield on Saturday, April 15 1989, there’s a chance that justice may finally be in sight for the determined families of the 96 dead and the survivors from that day. The key question is, Why has it taken so long?

We hear a lot these days about “fake news” and “post-truth politics,” but media coverage of the disaster plumbed new depths. The focus for people’s anger was, and remains, the infamous Sun newspaper’s front-page (above, published during Kelvin MacKenzie’s tenure as editor), published four days after the tragedy, headlined THE TRUTH. But the Sun was not alone in its misconduct; the media overall played a dire role in disseminating gross untruths. The disaster, unlike many others, was comprehensively recorded live in front of a TV audience and by sports photographers present for the match.

The sheer scale of the tragedy attracted massive media coverage with reporters, photographers and camera crews converging on both Sheffield and Liverpool. The result was that the Sunday and Monday papers published close-up photos of Liverpool  supporters either trapped, injured or dead behind the wire, graphically showing their terror and torture.

The official death list had not been published so the papers had no way of knowing whether the individuals pictured were alive or dead. Robert Maxwell’s Mirror had recently moved to full-colour and carried 16 pages on the story, filling the front page with a grisly picture of fans who appeared dead or dying, jumbled together on top of each other, and showing blue asphyxiated faces.

I intended to buy all the newspapers that Monday to monitor coverage, but I was so appalled by the Mirror that I could not buy it.

What was startling about the coverage in most national and regional newspapers was the certainty about who caused the disaster: the guilt was firmly placed on Liverpool fans. This coverage shaped public perceptions of the disaster for years. We know now that the South Yorkshire Police (SYP) match commander, Chief Superintendent David Duckenfield, had lied to senior officials when he said Liverpool fans had forced their way into the stadium and rushed into the central pens, thereby causing the fatal crush. It was 26 years later when he appeared at the Warrington inquest into Hillsborough in March 2015, when he finally admitted that he had ordered Gate C to be opened.

SYP disseminated a distorted, emotive and sensational version of events that shaped media reporting, and excluded any alternative explanations for the disaster. The key to this was White’s News Agency, the Sheffield company which circulated the SYP allegations. Their reports were based on meetings over three days between agency staff and SYP officers, and interviews with Irvine Patnick MP, and the South Yorkshire Police Federation Secretary, Paul Middup. On the day the controversial Sun front page was published, Middup told Police Federation members that “putting our side of the story over to the press and media” had been his priority.

The seamless narrative fitted every prejudice about drunken Liverpool supporters, violent and ticketless, causing mayhem and death. It took the Hillsborough Independent Panel report of September 2012 to totally demolish that web of lies.

The pictures and reports in newspapers triggered revulsion; the Press Council was flooded with complaints and set up an inquiry. Newspapers, too, were deluged with angry callers and letters. For Liverpool’s bereaved families, however, the pain and anguish of such exposure was indescribable. The next wave of horror for Liverpool was the invasion by journalists tasked with the grisly job of getting pictures of the dead and tear-jerking stories from their parents, relatives and friends. Then, to add to it all, the massive media intrusion into private grief continued at funerals as the bereaved families buried their dead.

It was outrage at this state of affairs that prompted the Campaign for Press and Broadcasting Freedom (CPBF) to organise a public meeting in the iconic Bluecoats building in Liverpool, where the speakers were Eamon McCabe, picture editor of the Guardian, Steve Kelly, a former Granada producer and author of the official history of Liverpool FC, and Rogan Taylor of the Football Supporters’Association.

Steve Kelly told how, “A week after Hillsborough I was telephoned by the producer of a leading BBC current affairs programme. ‘Would I like two days’ work?’ They wanted someone to go and knock on the doors of the bereaved and ask if they could film the funerals and do some interviews. They had a list of a dozen names and addresses but weren’t sure who had been buried. In other words, I might knock on a door of a bereaved family who had already buried its dead. They did not wish to tap my knowledge of football but wanted instead to use my credibility. They knew that the reputations of journalists were at an all-time low, but with my association with Liverpool FC, I might have been able to get access where they would be refused.”

Eamonn McCabe slated the cruel and insensitive use of close-up pictures in many of the tabloids, while Rogan Taylor attacked the way the coverage of the disaster demonised football fans, particularly those who supported Liverpool. From the audience, Brian Brierley argued for a boycott of the Sun in Liverpool, one which has been in place ever since.

But the key issue highlighted was how powerless people felt in challenging the lies being printed about Liverpool supporters and preventing the gross intrusion into people’s grief. The tabloids seemed to be able to act with impunity in the absence of effective press regulation. On that front not much has changed, but on January 12, 2017, the Independent Police Complaints Commission (IPCC) and Operation Resolve jointly referred files of evidence to the Crown Prosecution Service (CPS). Fifteens file relate to Operation Resolve’s investigation, and the potential offences include gross negligence, manslaughter, perverting the course of justice, misconduct in public office and offences under the Safety of Sports Ground Act 1975 and Health and Safety at Work legislation.

The day after its infamous front page, the Sun carried another front page opinion piece, “The Truth Hurts.” But not as much as the lies the paper relentlessly peddled under its foul-mouthed, bullying editor, Kelvin MacKenzie.

Now, perhaps, there is the prospect of justice for the incredibly brave and determined Hillsborough families after their 28-year battle against media lies.