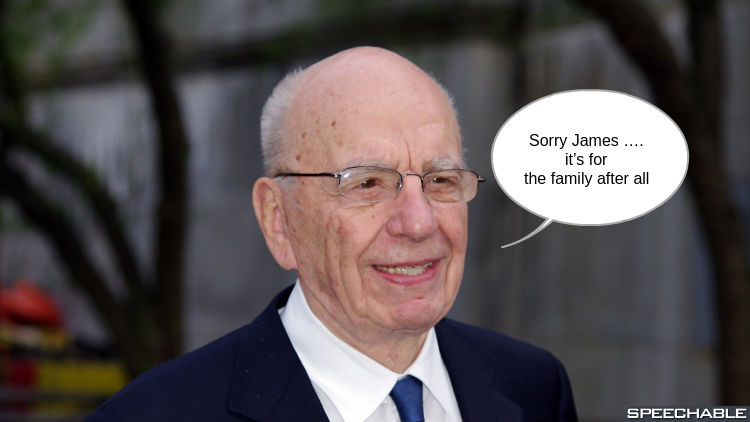 “Rupert Murdoch 2011 Shankbone” by David Shankbone is licensed under CC BY 2.0

For more than 30 years – longer than anyone else around him, since Murdoch picked him up from the Daily Express to lead the charge for Thatcherism, reaction and war — MacKenzie has absolutely personified the Sun. He is pure filth, a loudmouth, swaggering, fuck-you right-wing boor of the kind that Murdoch likes to hire as presenters on Fox TV.

Quite likely he will take him to the US, because Mackenzie is a liability over here, and, er, because Fox is losing presenters rather fast. Two of the three top evening talkshow “anchors” as they call them have gone in the last six months, along with other key personnel.

Murdoch has paid out a reported $80 million-plus in compensation to Fox staff forced out of their jobs, victims they claim of sexual and racial harassment – though the most money has gone in pay-offs to the harassers themselves. They were key men in Murdoch’s entourage, including Roger Ailes, chief executive since Fox started, and Bill O’Reilly, once his top-ranking talkshow host. Vile, offensive, brutal men.

But Rupert Murdoch is prepared to throw them overboard, we are led to believe, to win complete control of Sky. It is true he has always wanted that control, ever since the government forced the merger of newly-launched satellite rivals Sky and BSB in 1990 and he was restricted to a 39.1 per cent share.

He came closest in 2010-11 when a bid that was on the verge of acceptance by the coalition government had to be withdrawn as the phone-hacking scandal blew up. If he can succeed with his current bid it will make him a lot of money, so he is prepared to sacrifice people very close to him.

MacKenzie’s departure (if it is real) shows as well how delicate Murdoch must consider the matter to be. His entourage and apologists in the industry have been saying for months that the regulatory process that the bid is now going through is a formality; it’s bound to go through.

But would he be cleaning out the stables like this if he didn’t have to? The industry insiders are also saying that Rupert is not himself too keen on the clear-out but is being pushed by his ambitious sons, notably James, who is chief executive of 21st Century Fox and already chairman of Sky.

James hankers for total control even more hungrily than his dad. After all, he was chairman of Sky the last time round, when the earlier bid was abandoned in 2011, and also, incidentally, of News International, as the Murdochs’ London newspaper company was then called. NI of course was responsible for the phonehacking and corruption on those papers that almost brought the whole group to its knees five years ago.

In the current regulatory process, Ofcom is having to consider the “corporate governance” of the Murdoch group: would they be “fit and proper” owners of Sky? Ofcom was not required to do so by the government but was forced into it by the strength of the protests against the bid.

The repugnant goings-on at Fox are part of the evidence against the Murdochs, along with the UK scandals. Even the timid BBC is reporting that these add up to a serious threat.

The whole affair shows, in fact, that protest campaigns dismissed as hopeless at the start can succeed. This is a great boost to groups like the CPBF and others in the Media Reform Coalition, who will step up our campaigning.

But James Murdoch has fucked things up time and again. In its ruling on the 2010-11 bid Ofcom said he “repeatedly fell short of the conduct to be expected of a chief executive and chairman” and that his lack of action on phone hacking was “difficult to comprehend and ill-judged”.

To achieve his long-sought goal, Rupert has shown himself to be ruthless, sacking some of his closest associates: Ailes, O’Reilly, MacKenzie …. To finally succeed there is one more who will have to go. He must sack his own son.