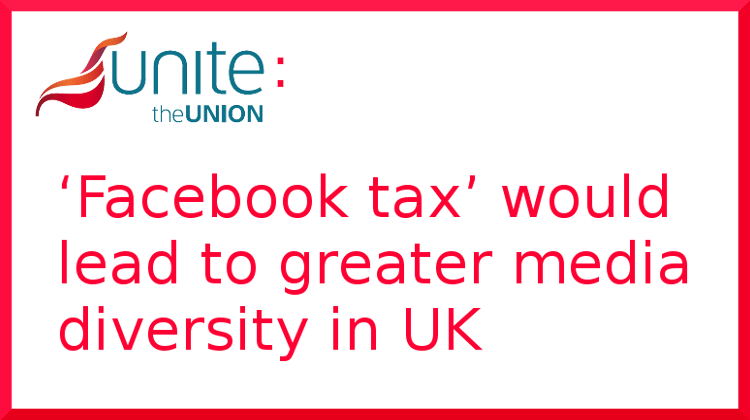 Unite said that the Labour leader is ‘definitely on the right track’ with his proposals for a ‘digital license fee’ to help BBC funding and diversity, paid for by a tax on major media-tech businesses and broadband companies, such as Facebook, Amazon and Netflix.

The union, which has members at the BBC, across the independent TV sector, publishing and in newspapers, also welcomed the recommendation to establish an independent fund to support public service journalism, again paid for by the media-tech giants.

“The big idea in Jeremy Corbyn’s speech is the tax on the technology giants, such as Amazon and Google, to help fund the BBC and also to allow local and independent investigative journalism to flourish.

“For far too long, the powerful media-technology companies have managed to get away with paying ludicrously small amounts of tax to the Treasury, while raking in stupendous profits.  These companies can well afford such a tax.

“This glaring disparity needs to be addressed as the money this tax would raise could help create more diversity in content, the media, including printed and investigative publications.

“For example, regional journalism has been battered by cut backs to staff, local titles have closed,  and the internet scoops up advertising revenues. At a frontline level, this means that local politics, councils and community concerns have not been always been covered in the depth we used to see – and, as a result, democracy and the right to know in local communities has been seriously eroded.

“We also support the idea of elected representatives on the board of the BBC to give more diversity and balance – and to shine a greater light on the policy making process.

“Jeremy Corbyn’s wide-ranging speech on the media is to be welcomed – he is definitely on the right track and we look forward to working with him and Labour’s team.”

Unite is Britain and Ireland’s largest trade union with over 1.4 million members working across all sectors of the economy. The general secretary is Len McCluskey.