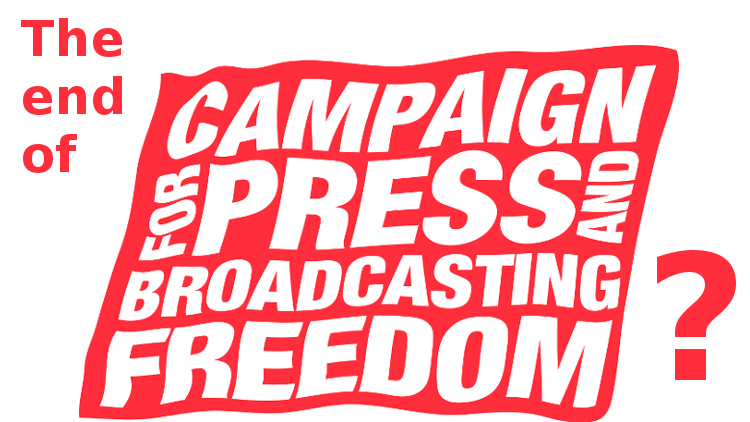 The Campaign’s AGM on Saturday July 14 could well be its last.

The National Council has decided to recommend that the CPBF be dissolved, and its officers have prepared a plan for winding down.

The decision was, of course, not taken lightly. Many on the NC have been involved with CPBF since the beginning, fighting for media workers’ rights and campaigning for a better media for nearly 40 years.

But with finances projected to run out by the end of the year end, and with obligations to pay for our national co-ordinator and our office space, the NC has agreed to present the following motion to the AGM:

“In view of the continuing decline of the financial situation of our organisation this Annual General Meeting has decided to close down the CPBF and cease all campaigning, administrative and financial processes by no later than 30th November 2018.”

If this goes through, would that be the end of CPBF? Technically, yes. On or before December 1, it would cease to exist.

But the NC is unanimous in the belief that campaigning for better media is more important than ever: giant media mergers and tech giant domination are creating an ever increasing concentration of media ownership whilst newspaper circulation plummets and budgets for public service media are slashed.

The need for more diverse, democratic and accountable media seemingly grows more urgent every day. So what can we all do to help the fight for better media to continue?

In addition to being in poor financial health, it could be argued that CPBF’s 20th century name and organisational structure and status as an unincorporated association are all no longer fit for purpose. But there is still power in our roots. There is indeed an expanding community of people striving to make the world a fairer media place.

When CPBF was founded in 1979 it occupied a unique position – no one else was really campaigning for media reform – but that position no longer exists. Many new players have sprung up in response to growing public awareness of the issues.

The Media Reform Coalition and Hacked Off formed in response to the phone hacking scandal in 2011. More recently Stop Funding Hate has risen to prominence. Launched just after the Brexit referendum, their first video reached millions in a week. Within a year they had raised over £100,000 in crowdfunding to take on “the hate campaigns of the Sun, Daily Mail and Daily Express by persuading brands to pull their advertising”.

Unlike the CPBF, none of these have union-organised media workers at their core, and none are membership organisations with a democratic, accountable structure.

The campaign was founded by the media unions, to co-ordinate their members’ resistance to the growing power of the media monopolies, and to bring in other unions and other people committed to the same ends.

Changes in the trade union movement have affected the CPBF as well. The stream of union mergers reduced subscription income, and the heavy pressure on their energy and resources left them with less for media reform.

Now there are many media campaigns, and countless young people moving into the sector media who want to make big media more accountable and small media more viable.

Everyone in the CPBF wants these things too and will encourage endeavours to build a new campaign organisation, still involving media workers but with a wider range of support, to take up this vital work.