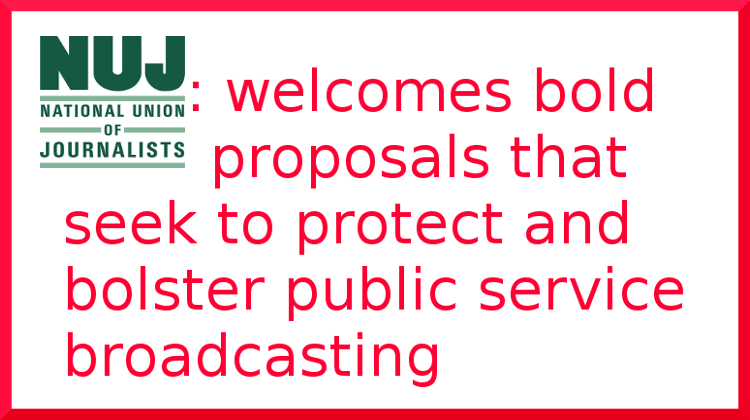 “The NUJ welcomes bold proposals that seek to protect and bolster public service broadcasting, and aim to carve a future for the BBC that is free from the ceaseless political pot-shots lobbed its way in the last two licence-fee settlements that have undermined its resources and threatened its ability to deliver quality content and programming. As a union we want to see an end to the raiding of the licence fee – which has put the BBC in the unenviable position of having to fund free licences for the over-75s or be the organisation that is forced to wield the axe on what had always been a government-funded welfare benefit.

“Extending freedom of information legislation to include private companies in receipt of public contracts can only be good for public interest journalism. As will be the long-overdue need for action on digital monopolies that have so badly hit traditional media players in the industry – whether it’s an agreed settlement with the likes of Google and Facebook or a windfall tax, that is money that could be a shot in the arm to journalism in the UK.

“As a trade union we would agree on the importance of empowering journalists to act ethically, increasing diversity and equality in the media, tackling the concentration of media ownership and power, and enabling media workers to have a louder voice in their own workplaces and on decision-making boards.

“The NUJ is not affiliated to any political party but it is important that politicians recognise the vital role of independent public interest journalism, and the grave price that some journalists have paid with their lives for speaking truth to power. We hope this speech is just the start of a more detailed discussion about how to bring change to the media that benefits journalists, journalism and society as a whole.”