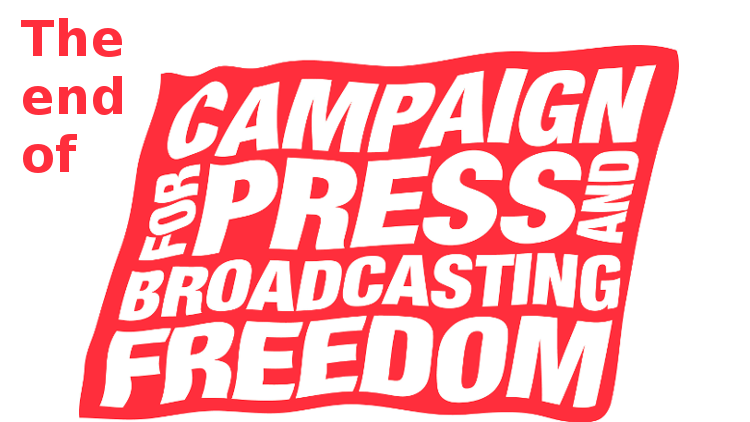 At the 2018 AGM of CPBF the following motion to close down the Campaign, proposed by our National Council (NC) passed:

“In view of the continuing decline of the financial situation of our organisation this Annual General Meeting has decided to close down the CPBF and cease all campaigning, administrative and financial processes by no later than 30th November 2018.”

So, after nearly 40 years of fighting for media workers’ rights and for a more diverse, democratic and accountable media, on or before 30 Nov 2018 the Campaign for Press and Broadcasting Freedom will be no more.

Our organiser’s contract ends on 30 September and we’re due to vacate our office by 31 October.

We’ve arranged for our physical archive of campaigning materials to be hosted by the Bishopsgate Institute.  An archive of this website and the archive of our previous website will be kept online for at least 10 years, but the CPBF will be no more.

That means there will soon be no democratic membership organisations in the media reform space.

The beginning of Better Media

However, as mentioned previously “the NC is unanimous in the belief that campaigning for better media is more important than ever” and so with that in mind, and building on the Better Media discussions we’ve had after CPBF’s last two AGMs, our organiser will be spending the next two months not just winding down CPBF, but also trying to kick start a “a large scale democratic membership organisation to organise, fund and support campaigns for Better Media in the UK.”

It’s still very early days and this is all a work in progress, but if you’re a member or supporter of CPBF we’d like to strongly encourage you to join Better Media right now: